It’s a very strange thing, selling a book before it’s finished. Now that Australia, Germany, and the US have bought “Isabella’s Gift”, I need to finish it. I’ve written about 70 000 words 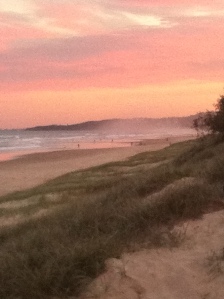 so far, but have paused for a few weeks while I catch up on some research.

The main part of the story is set in 1901. Isabella Winterbourne survives a shipwreck off the coast of Queensland, Australia, and sees it as a chance to escape her husband’s oppressive family. But the only trinket she has by which to remember her infant son is tied up with a Winterbourne family treasure that they are not so keen to let go of. Isabella takes refuge with the lighthouse keeper at isolated Daybreak Point, but increasingly finds it difficult to know whom to trust. Intertwined with this story is the story of Libby, one-hundred and ten years later, who returns to her childhood home of Daybreak Point to repair a lifetime’s strained relationship with her sister, who runs a struggling tea-house business in a town that is changing and developing fast. I’d love to tell you more about this aspect of the plot, but that’s where I’m up to at the moment. There are a few too many complications in the present-day plot, so I’m looking at culling them. I’ll be thinking about that while I research the telegraph service in Queensland in 1901.

Of course the best part of the research involved in this book is the time I have to spend at the Sunshine Coast. It’s a two-hour drive from where I live, and spectacularly beautiful. I took the photograph above at Peregian Beach in April (Australian autumn) on a balmy evening when the water was still warm after the sun went down. These are the few lines I wrote in my notebook that evening, that have made their way into the story. The rest of it should be published in about a year. I’d best get cracking.

Libby floated on her back for a while, letting the waves carry her. Salt water on her lips, hair streaming behind her. Then she waded back out onto the beach and sat on the sand to dry by air. The sweet bruise of dusk in the sky. Brazen pinks and golds gave way to subtle purple and pewter. She was wrapped in velvet: the soft sand, the sea mist over the headland, the temperate breeze, and her own human softness, her own flesh and muscle and aching heart.