Over the summer (in Australia, summer is just finishing) I wrote a book. It took me only three months to write, and a little bit of time to edit. It was the easiest book I ever wrote, and it’s called Ember Island. I’ll post more information as I have it. But this post is a shout-out to the person who made it all possible: my research assistant, Heather. Tirelessly, day or night, she responded to my endless texts and emails asking for tiny details that she had to chase down from all over the place. She had to cold-call experts, spend hours in dusty libraries, sort out details of all kinds of random aspects across time and location. Just today, as I was finishing off the structural edit to go to the publisher, I sent her my last query. Would it be possible that a 10 year old girl in the late nineteenth century would have heard of the early medieval Irish poem “Pangur Ban”? Within 15 minutes, I had my answer. And therein lies Heather’s true worth: she told me the truth (it wasn’t possible) and when I told her I was going to ignore her and put it in anyway (for we never let the truth get in the way of the story), she just sent me a smiley face. 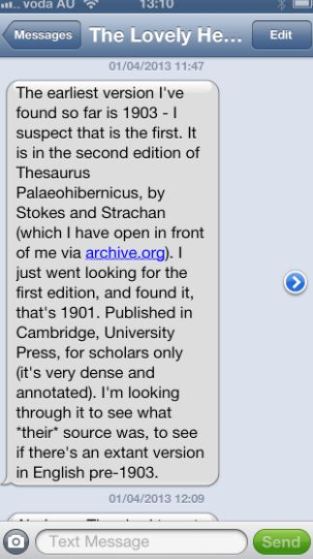 Writers don’t write in a vacuum. There is a large machinery of support all around them. From family and friends, to agents and publishers, to helpful people at stationery stores and the reader who sends you fan mail at precisely the moment you feel you should give up this writing caper and retrain as a podiatrist. I am grateful for all of those who support me to write my books, but especially to the lovely Heather, whose wisdom and intelligence and vast store of historical knowledge made my summer so easy.

3 thoughts on “On having a research assistant”